The moon looms large in folklore, urban legends and myths from around the world. And on Monday Nov. 14, it will loom larger in the sky than it has in decades. Every full moon is a spectacular sight, if skies are clear. But November’s full moon is far from ordinary. It will be the closest full moon since 1948, and we won’t see another full moon this close again until 2034, according to NASA.

Because the moon follows an elliptical path around Earth, sometimes it is closer to us — at its closest, a position called “perigee,” it is 14 percent closer to Earth than when it is at its farthest position, known as “apogee.” When that proximity coincides with the full moon phase, making the moon 30 percent brighter in the night sky, the event is referred to as a “supermoon.”  The moon holds a mystical place in the history of human culture, so it’s no wonder that many myths — from werewolves to induced lunacy to epileptic seizures — have built up regarding its supposed effects on us.

“It must be a full moon,” is a phrase heard whenever crazy things happen and is said by researchers to be muttered commonly by late-night cops, psychiatry staff and emergency room personnel. In fact a host of studies over the years have aimed at teasing out any statistical connection between the moon — particularly the full moon — and human biology or behavior. The majority of sound studies find no connection, while some have proved inconclusive, and many that purported to reveal connections turned out to involve flawed methods or have never been reproduced.

Reliable studies comparing the lunar phases to births, heart attacks, deaths, suicides, violence, psychiatric hospital admissions and epileptic seizures, among other things, have over and over again found little or no connection. One possible indirect link: Before modern lighting, the light of a full moon have kept people up at night, leading to sleep deprivation that could have caused other psychological issues, according to one hypothesis that awaits data support.

Below, I’ll review several studies — the good, the bad and the in between — but first some basic physics: 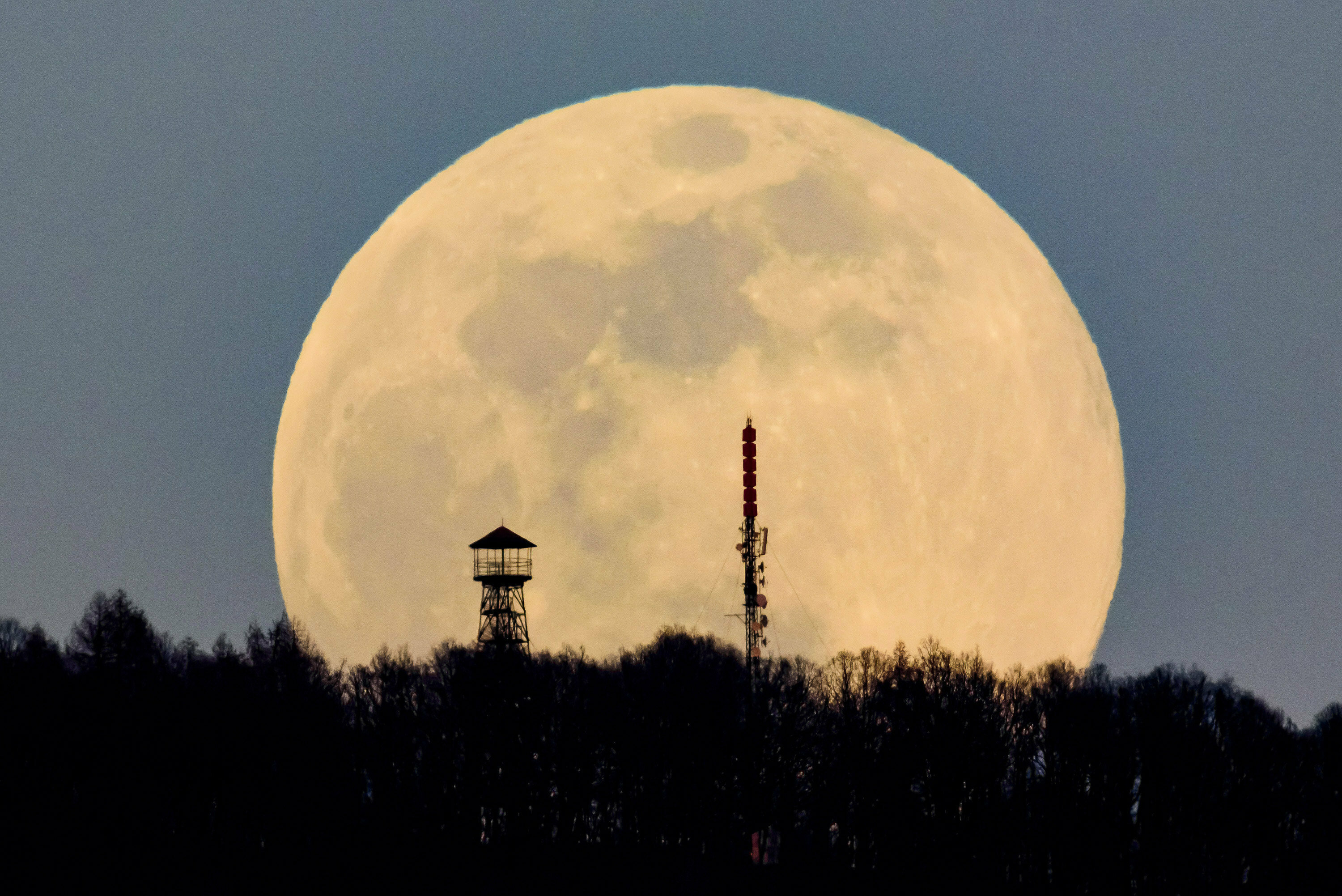 The moon, tides and you

The human body is about 75 percent water, and so people often ask whether tides are at work inside us. The moon and the sun combine to create tides in Earth’s oceans (in fact the gravitational effect is so strong that our planet’s crust is stretched daily by these same tidal effects). But tides are large-scale events. They occur because of the difference in gravitational effect on one side of an object (like Earth) compared to the other. Here’s how tides work:

However, there’s no measurable difference in the moon’s gravitational effect to one side of your body vs. the other. Even in a large lake, tides are extremely minor. On the Great Lakes, for example, tides never exceed 2 inches, according to the National Oceanic and Atmospheric Administration (NOAA), which adds, “These minor variations are masked by the greater fluctuations in lake levels produced by wind and barometric pressure changes. Consequently, the Great Lakes are considered to be essentially non-tidal.”

That’s not to say tides don’t exist at smaller scales.

The effect of gravity diminishes with distance, but never goes away. So in theory everything in the universe is tugging on everything else. But: “Researchers have calculated that a mother holding her baby exerts 12 million times the tide-raising force on the child than the moon does, simply by virtue of being closer,” according to Straightdope.com, a Web site that applies logic and reason to myths and urban legends.

Consider also that tides in Earth’s oceans happen twice every day as Earth spins on its axis every 24 hours, bringing the moon constantly up and down in the sky. If the moon’s tugging affected the human body, one might presume we’d be off balance at least twice a day (and maybe we are).

Here are some of the reputable studies in peer-reviewed journals that have failed to find connections:

A study in the journal Epilepsy & Behavior in 2004 found no connection between epileptic seizures and the full moon, even though some patients believe their seizures to be trigged by the full moon. The researchers noted that epileptic seizures were once blamed on witchcraft and possession by demons, contributing to a longstanding human propensity to find mythical rather than medical explanations.

“The belief that the lunar cycle is associated with the onset and severity of psychiatric symptoms has persisted since the middle ages,” researchers write in 2014 in the journal ISRN Emergency Medicine. Has this belief been proved out by science?

A 2005 study by Mayo Clinic researchers, reported in the journal Psychiatric Services, looked at how many patients checked into a psychiatric emergency department between 6 p.m. and 6 a.m. over several years. They found no statistical difference in the number of visits on the three nights surrounding full moons vs. other nights.

For the 2014 study, researchers led by Varinder Parmar of Queen’s University in Ontario, Canada, looked at psychiatric emergency-department visits around the night of the full moon: six hours, 12 hours and 24 hours before and after a full moon. During the 12 hours before and after a full moon, EDs saw significantly more patients with personality disorders as well as with more urgent triage scores (those who needed more urgent care). However, fewer patients with anxiety disorders showed up during the 12 hours and 24 hours prior to and following the full moon.

People don’t seem to be “howling at the full moon,” at least according to the research out there.

A review, called a meta-analysis, of 37 published and unpublished studies regarding a link between the full moon and “lunacy”  as well as other behaviors found that just 1 percent of the change in activities considered “lunacy” —  mental hospital admissions, psychiatric disturbances, crisis calls, homicides, and other criminal offenses, according to the researchers — could be attributed to the full moon, the scientists wrote in their study published in 1985 in the journal Psychological Bulletin.

Researchers examined 150,999 records of emergency room visits to a suburban hospital. Their study, reported in American Journal of Emergency Medicine in 1996, found no difference at full moon vs. other nights.

Do doctors and nurses mess up more during the full moon? Not according to a study in the October 2009 issue of the journal Anesthesiology. In fact, researchers found the risks are the same no matter what day of the week or time of the month you schedule your coronary artery bypass graft surgery.

Not all studies dismiss lunar influence. In studying 11,940 cases at the Colorado State University Veterinary Medical Center, researchers found the risk of emergency room visits for pets to be 23 percent higher for cats and 28 percent higher for dogs on days surrounding full moons. It could be people tend to take pets out more during the full moon, raising the odds of an injury, or perhaps something else is at work — the study did not determine a cause.

This is one of those topics on which you will find much speculation (some of it firm and convincing-sounding) and little evidence. The idea is that the moon is full every month and women menstruate monthly. Here’s the thing: Women’s menstrual cycles actually vary in length and timing — in some cases greatly — with the average being about every 28 days, while the lunar cycle is quite set at 29.5 days. Still, there is one study (of just 312 women), by Winnifred B. Cutler in 1980, published in the American Journal of Obstetrics & Gynecology, that claims a connection. Cutler found 40 percent of participants had the onset of menstruation within two weeks of the full moon (which means 60 percent didn’t). If anyone can tell me how this oft-cited study proves anything, I’m all ears. Also, one should be skeptical that in the intervening three-plus decades, nobody seems to have produced a study supporting Cutler’s claim.

A pair of conflicting studies in the British Medical Journal in 2001 leaves room for further research. In one of the studies, animal bites were found to have sent twice as many British people to the emergency room during full moons compared with other days. But in the other study, in Australia, dogs were found to bite people with similar frequency on any night. Some wild animals do behave differently during a full moon: For example, lions usually hunt at night, but after a full moon, they’re more likely to hunt during the day — likely to make up for the tough going on a moonlit night. There’s been a lot of research into this topic. In the Journal of Affective Disorders in 1999, researchers suggested that before modern lighting, “the moon was a significant source of nocturnal illumination that affected [the] sleep–wake cycle, tending to cause sleep deprivation around the time of full moon.” They speculated that “this partial sleep deprivation would have been sufficient to induce mania/hypomania in susceptible bipolar patients and seizures in patients with seizure disorders.” When I first wrote this story in 2009, I looked over these oft-cited suggestions, scoured the scientific literature, and could not find where any of them had been tested or verified with any numbers or rigorous study of any kind. Since then, there have been a few more studies on the topic.

A small study in 2013, of just 33 volunteer adults, found they slept less during the full moon even when they could not see the moon and were not aware of the current lunar phase. The researchers say the findings would need to be replicated before they could be considered reliable, however. Then in 2014, a broad review of sleep-moon research, done by scientists at Max-Plank Institute of Psychiatry, found no statistically significant correlation between the lunar cycle and sleep.

More recently, research published in March of 2016, of 5,800 children age 9 to 11 in 12 different countries, found they slept about 5 minutes less on nights with a full moon. That’s “unlikely to be important” from a health perspective, the researchers said, but it is interesting. They speculate that the brightness of the full moon may be the reason, but with all the artificial light around these days, they doubt that suggestion.

Expect more small studies in the future to suggest a link, and don’t be surprised if further broad scientific reviews find the possible connections to be shaky.

How humans use objects in novel ways to solve problems

Oxford-AstraZeneca vaccine is cheaper than Pfizer’s and Moderna’s, and doesn’t require supercold temperature

Diet, exercise and a push in the right direction can reduce cardiovascular disease